Why is "digital" so important?

At one point or another, almost everyone has heard of or been exposed to the concept of "digital." We have digital television, digital music, digital photography, etc. Medical imaging is no exception to the rule of digital technology. Many medical imaging technologies are entirely dependent upon the concept of digitization. But what does it all mean? What is the difference between digital and analog? Is it always better to go digital? Why should I care? Hopefully, this blog post will begin to clarify the answers to these questions.

To begin, let's define the term digital. If something is digital, it means that it takes on only discrete values. To put this in terms of an analogy, imagine a child's slide. You must take the stairs to the top (digital) then use the slide to get down (analog). The stairs require you to ascend using exactly defined elevation values (stair steps). The slide, on the other hand, allows you to glide through all elevation values between the top and bottom and does not limit you to a predefined set of particular elevations to use on your way down. This is the difference between digital (discrete) and analog (continuous). 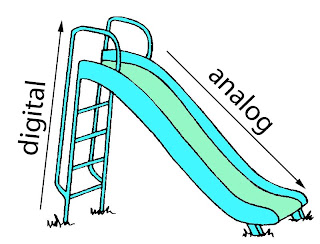 Now, applying this thinking to a signal, we can begin to see how things like images are digitized. Look at the smooth curve below. We can assume that this curve is practically continuous. We can digitize the curve through the process of sampling. Through the process of sampling, we can know the value of the curve at some predefined (discrete) points. In real life, this happens as a result of having only a finite number of detector elements when taking images. There are practical limitations on how small those elements can be, and therefore, there is a limit to how finely an object can be sampled to produce an image. 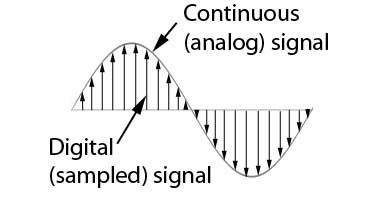 You might be asking yourself, "Why would I want to do digital sampling? Aren't we ignoring the majority of the information available in the signal?" The answer to the second question is "Yes" and "No." Yes, by sampling an image you are actually throwing away 99.99% of the available information. However, this information can be recovered through the process of interpolation. Without going into too much detail, let it be suffice to say that sampling typically gives us enough information to reasonably interpret the important characteristics of the signal in question.  However, sometimes all of the information cannot be recovered from the samples of a signal which can result in a phenomenon known as aliasing wherein parts of the original signal cannot be accurately represented through use of the samples. This topic will be discussed at a later time.


This still begs the answer to the "Why?" question of sampling and digitization. There are many reasons as to why so much of imaging has gone digital, so here are just a few. Digitization makes images easier to manage in the storage and recovery process. Computers, which are inherently digital, can be used to archive more images more efficiently than could ever have been possible with traditional hardcopy (film) storage. In addition, advanced 3D imaging technologies like computed tomography (CT) can produce thousands of images in a single examination which again makes computers the preferred route for storage. Digitization can also help to reduce patient radiation dose. In the case of planar chest imaging, digital detectors make more efficient use of radiation for image production when compared to film. Also digital detectors have a larger dynamic range than film, meaning that retakes are less often to be necessary due to over or under exposure. Finally, one very important reason that makes digital imaging more convenient than analog is the ability to conduct image processing. There are many techniques which can be used to enhance digital images which were never before possible with analog imaging techniques. There will be much more to say on the topic of image processing at a later date.

So, in the end, are things better now that we have digital imaging capabilities? I would say, for the most part, yes. Amid all of the spectacular benefits and neat math and science that digital imaging has to offer, there are areas where the technology falls short. For instance, a great number of mammograms are still taken with film. Mammography requires very fine resolution (sampling) which is still a limitation in the digital realm. There is also a cost difference between digital and film mammorgraphy with digital costing 1.5 to 4 times more for the necessary equipment (NCI). There are benefits to full-field digital mammography (FFDM), but this is just one example of an area where digital still has significant competition in the analog realm. It is important to note all of these details concerning digital technology in medical imaging because, quite frankly, this is the direction that the discipline is headed. It matters to the average consumer not only because images are being acquired digitally, but also because images (along with other portions of your medical records) are being stored digitally. This means that the limits to medical record access changes from physical access to electronic access. And the security of digital/electronic information is certainly a hot topic in today's world! However, the consumer should take comfort in knowing that all possible measures are taken by responsible medical institutions to protect your information. And the consumer should be doubly comforted to know that digital technology is quickly advancing the field of medicine into realms and possibilities never before realized.
Posted by JRW at 10:50 No comments:

One of the most common and well-known procedures in diagnostic imaging is the X-ray. Though it was one of the first medical imaging technologies to make its stay in the field (1896), several billion medical and dental x-ray examinations are still made every year worldwide. It is an incredibly useful technology used for many things all the way from diagnosing broken bones to the positioning of cancers inside the body in preparation for treatment (often with more X-rays!).

This is the basic idea behind the X-ray image. You shine an X-ray beam on a person and take a photograph of the shadows that get cast by different objects inside the body. This makes X-ray imaging a great alternative to cutting people open just to see what's inside! And in fact, this is the drive behind medical imaging as a whole: to get a non-invasive look at objects inside the human body so that doctors can have more information from which to draw more accurate conclusions regarding patient diagnosis.
Posted by JRW at 11:02 No comments:

Email ThisBlogThis!Share to TwitterShare to FacebookShare to Pinterest
Labels: X-ray

Hello world! Welcome to the modern-day equivalent of the Dream Temple of Kos where you, like Hippocrates, may begin to lay the foundations of your scientific understanding of medicine. More specifically, the teachings of this temple will focus on the applications of imaging in modern medicine as understood from the perspective of a medical physicist. As your guide, I hope to enlighten you, the curious reader, by exposing you to challenging, yet relevant topics as they arise in my studies and experience. I hope to call on the expertise of many fields (computer programming, politics, etc.) in order to enhance our understanding of the complex web woven by physics and medicine as they interact with one another in the context of the world around them.
Posted by JRW at 00:06 No comments: